I've had the car now for about 11yrs, It originally was black, And I bought it off a guy who used to drive round his farm with guns in the back...There were dents in the boot going outward! When I went for a test drive there was beer cans and old socks in the car, And I figured when I went back to buy it it would be tidied up...No, still a mess!

I didn't have a particularly good start to owning it...Within 3 days I put into a fence showing off:bawling:
But after needing a bit of a rebuild due to crashing it, I decided to paint it, (My friend is a Painter/Panel Beater) and decided to paint it TV2 Bayside Blue.
Shortly after getting it back, It lunched a bottom end bearing, So was decided to do a wee bit to the motor on rebuild, Was then running a little over 500hp at all 4wheels from a set of -5's, Poncams and Power FC:thumbsup:

I have slowly been upgrading the car for a while, And now have started doing some track days (very soft driving) so hence I have started collecting parts to make it more reliable for fun track days, while still having it road legal. 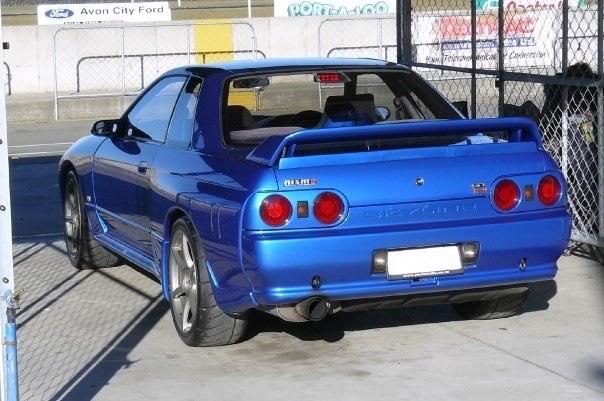 It's first Track Day, My local track has a reasonable front straight....But is small and twisty through the infield. (in the famous words of Dick Johnson "It's like running a marathon around your clothes line!") 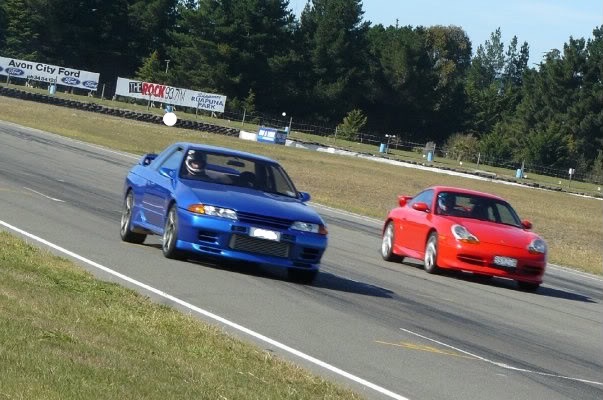 Passing a 911 out of the sweeper onto the main straight....But soon found the major issue with a big heavy car on a small twister track....The brakes!

Two to three laps, the pads were like marshmellows, and the rotors were warped and purple!

So.... Here is what I did to fix it:squintdan 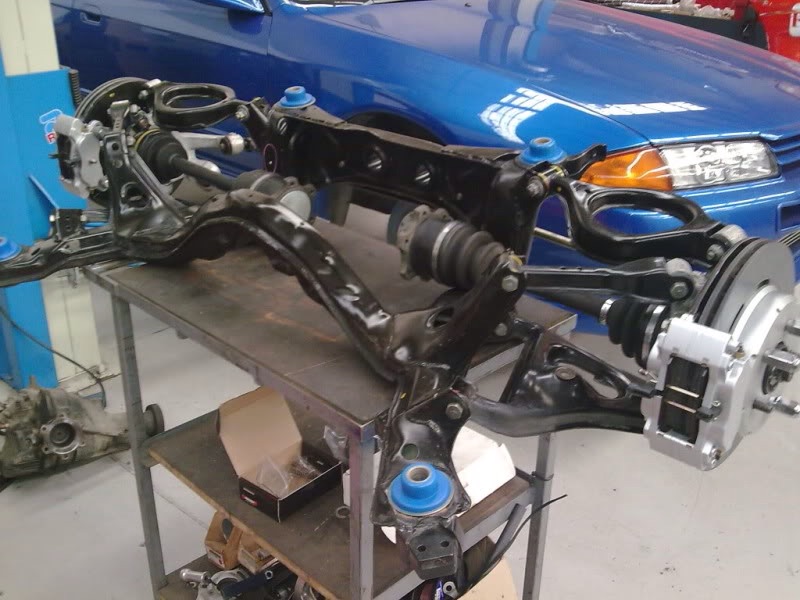 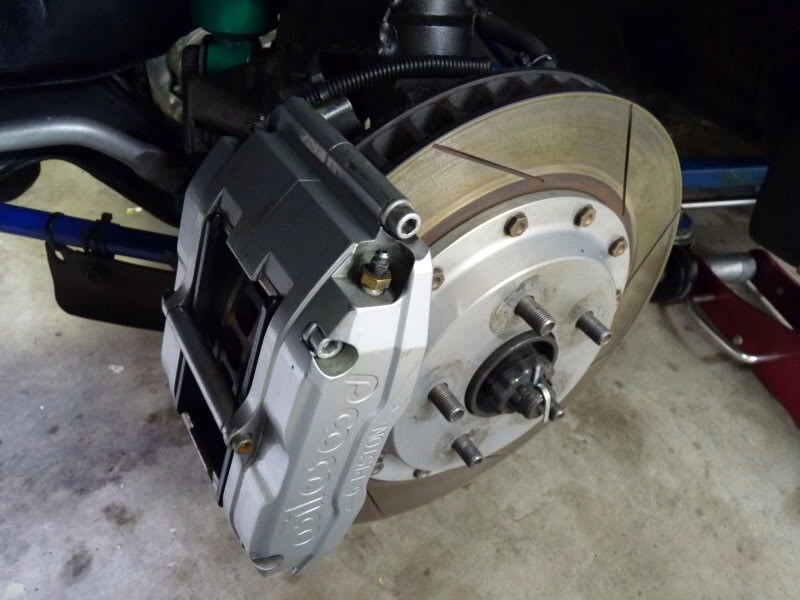 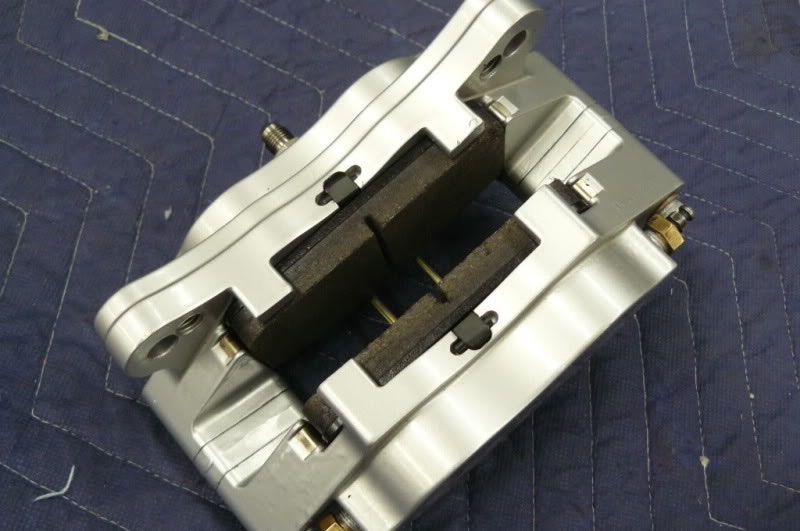 4 Pot Wilwood calipers, with alloy bells and a custom handbrake lever system. Being that we are not allowed to run hydro handbrakes on road cars in NZ, this runs the handbrak cables to a V-Brake system to pull the pads onto the disks. This means it weighs about half of a standard setup as I dont need a heavy cast rotor/bell and all the handbrake shoes etc.

While the rear subframe was out I replace the worn out subframe bushes with Nolathane ones.

I am also now running a Stagea RS260 master cylinder.....And this is now a HUGE improvement, Nice firm pedal, and great stopping power over and over again, Short of running longer races, these are great for track days, And due to keeping the ABS fine for the road.

I have replaced most every bushing with either new arms or Whiteline Bushes, Also it has Whiteline swaybays front and rear. 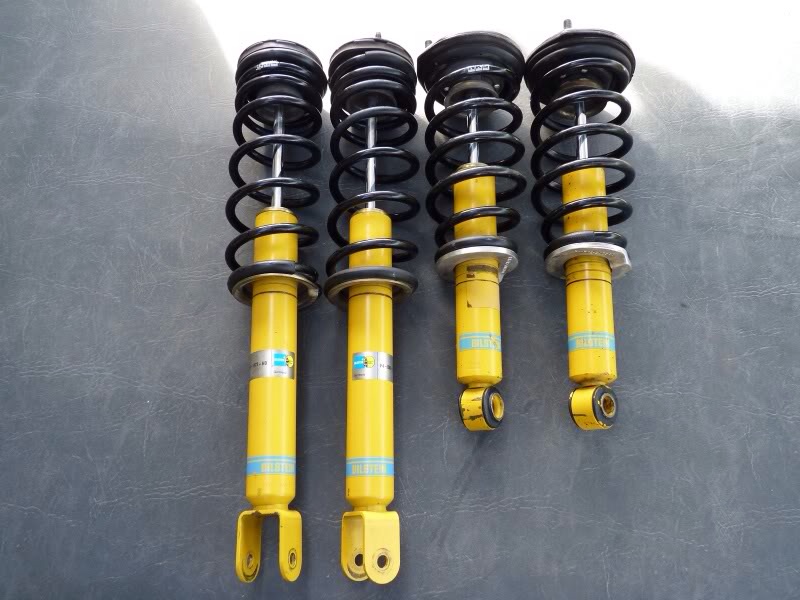 I then put the Tein SuperStreet's on when the Bilstiens gave up.... 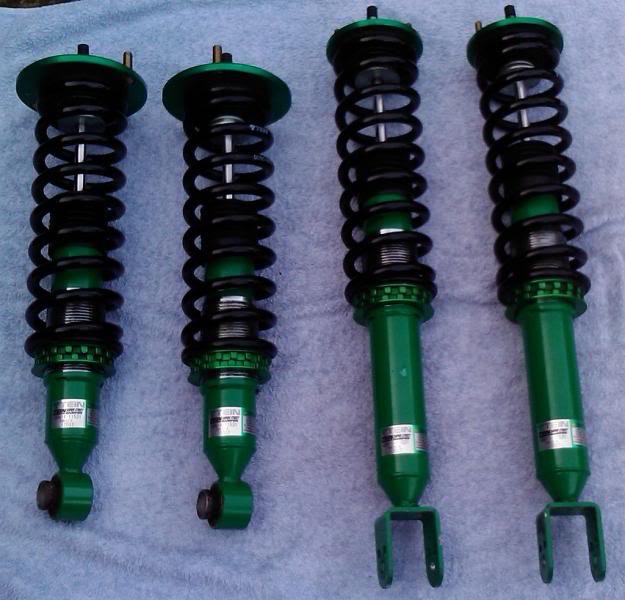 But they were both a bit soft for the track, so these went on, Tein MonoFlex with EDFC controller.
If or when these become toast, I'll get get them rebuilt by suspension God Mr Coote in Aussie 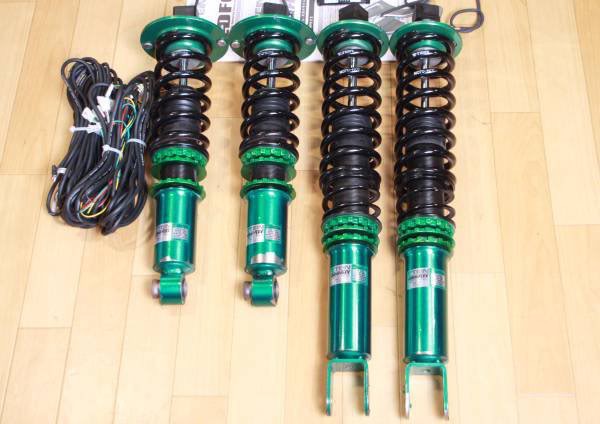 Joined Jan 28, 2008
·
4,586 Posts
I also found an old Bride seat that the cloth was knackered on, And had it recovered in matching alcantara, Also added a six point harness for track days. 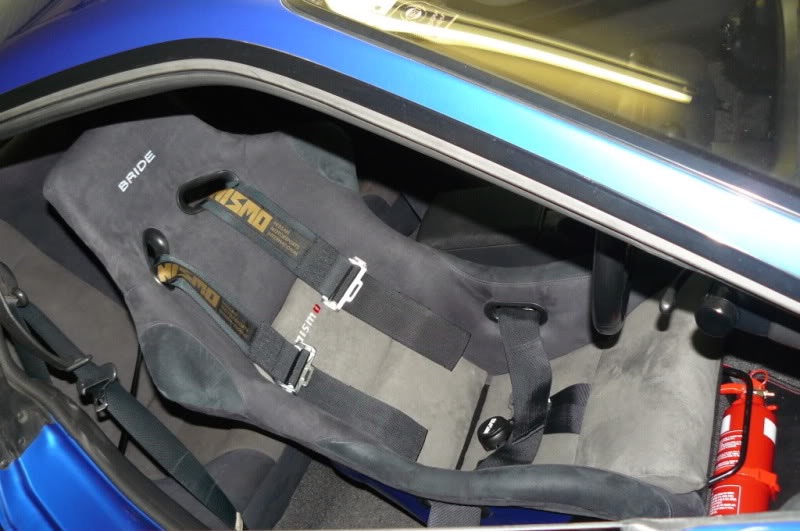 Got any recent pictures of the rear brakes? I need to see what the "boy" is getting He is also wanting to get a host of Whiteline parts for his GTR. 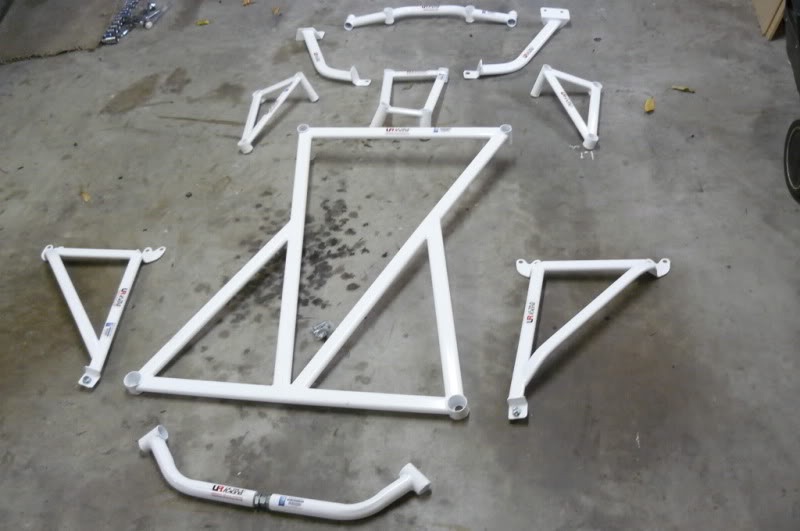 This really feels like it has stiffened things up....But it could just be in my head! In a perfect world I would have put a cage in and seam welded the chassis.

Joined Feb 27, 2003
·
5,726 Posts
Yeeeeee harrrrrrrrr!!!!!
I'm gonna love this thread, I love the fact it was used by hick farmers and has now turned into such a beauty!
Awesome work/pics Chris, keep it coming! 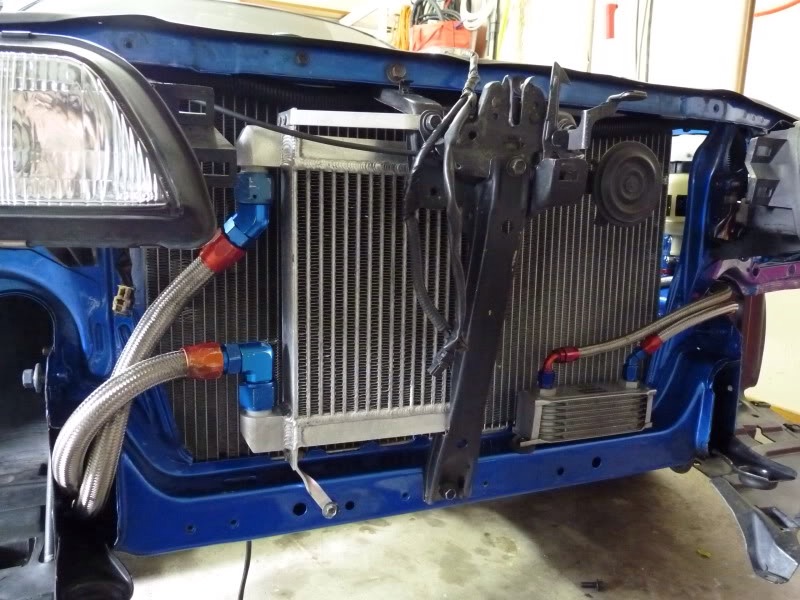 I also added a set of Greddy Hard pipes and with a bit of trimming of the front bumper support a 100mm Tube and Fin Trust Intercooler. 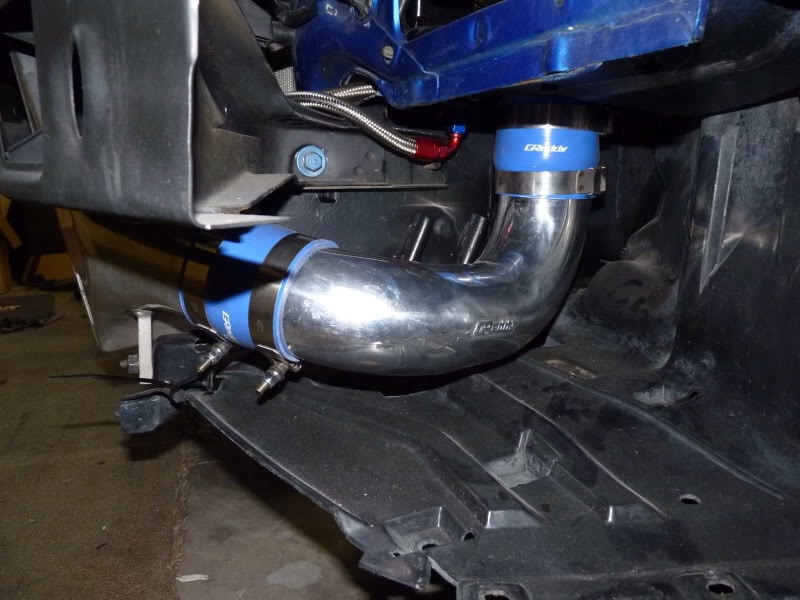 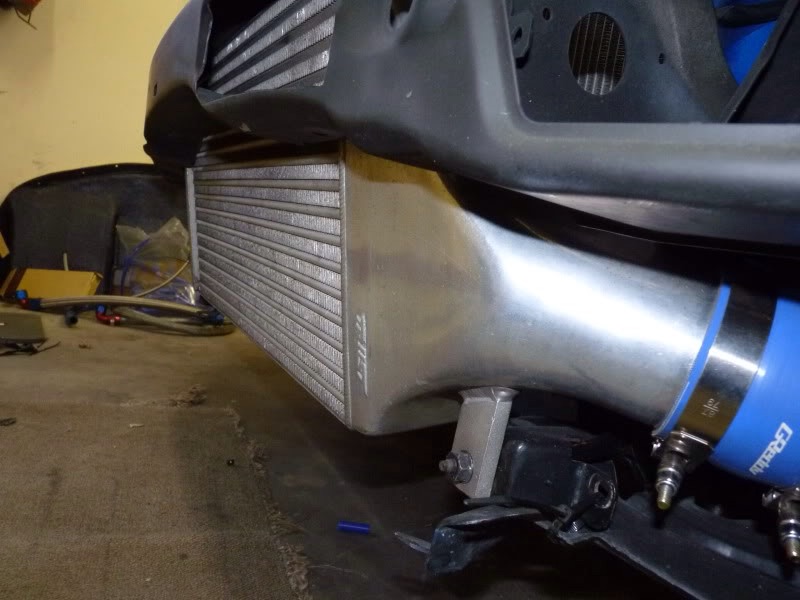 And I have removed the AC, And put a 50mm thick Ron Davis Radiator on as well (Recently have just put the twin 12" electric fans) 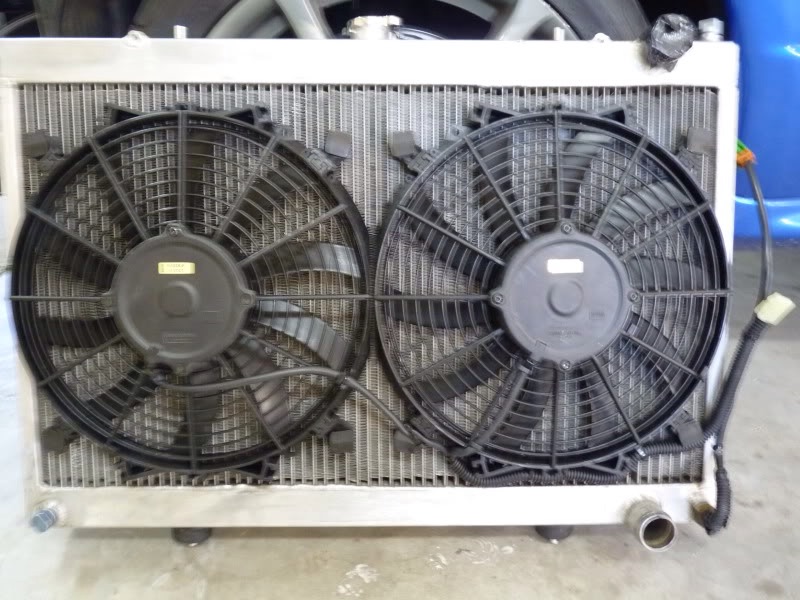 fourtoes said:
Yeeeeee harrrrrrrrr!!!!!
I'm gonna love this thread, I love the fact it was used by hick farmers and has now turned into such a beauty!
Awesome work/pics Chris, keep it coming!

New Fuel system....Someone is making a crap load of cash making these fittings, Far out are they expensive for a hose fittings!

All of the fuel lines are Teflon Braided Hose. I have a Nismo in tank lift pump, this fills the 2.5lt Surge Tank, Then two Bosch 044 pumps that will run a -6 line to each side of the dual entry fuel rail, with a -8 return to a Sard FPR and a -8 return to the surge tank. 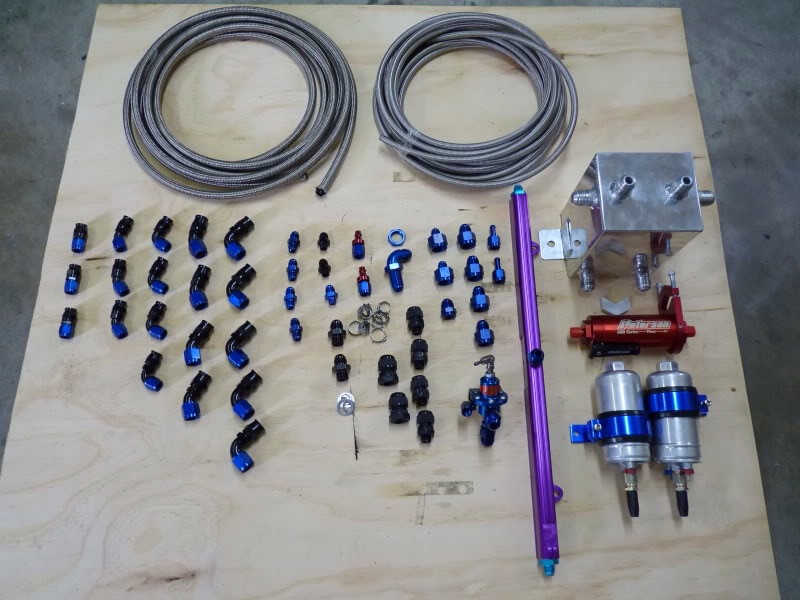 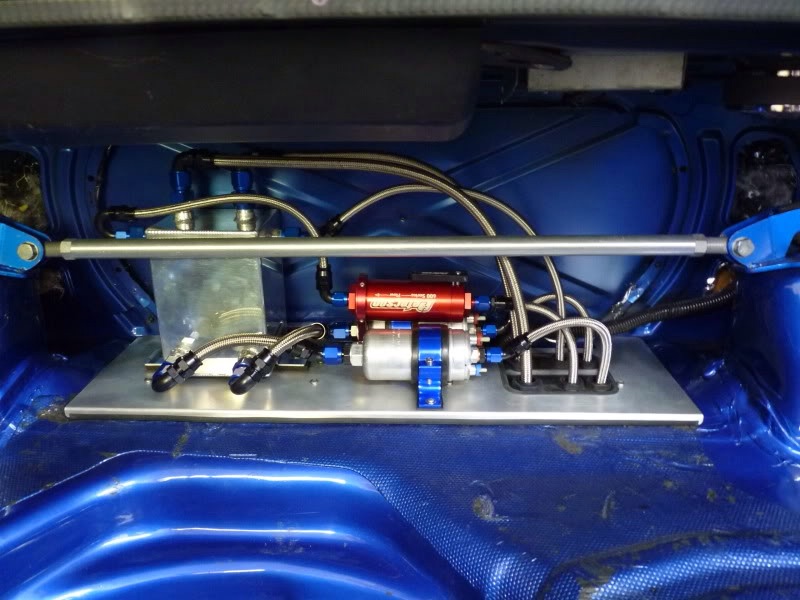 I also added an extra -8 return to back up the factory -6 return from the surge tank, This involved drilling a bulkhead fitting into the top of the tank, I trimed a hole in the boot above the tank to gain access, Then used a bulkhead grommet to cover. 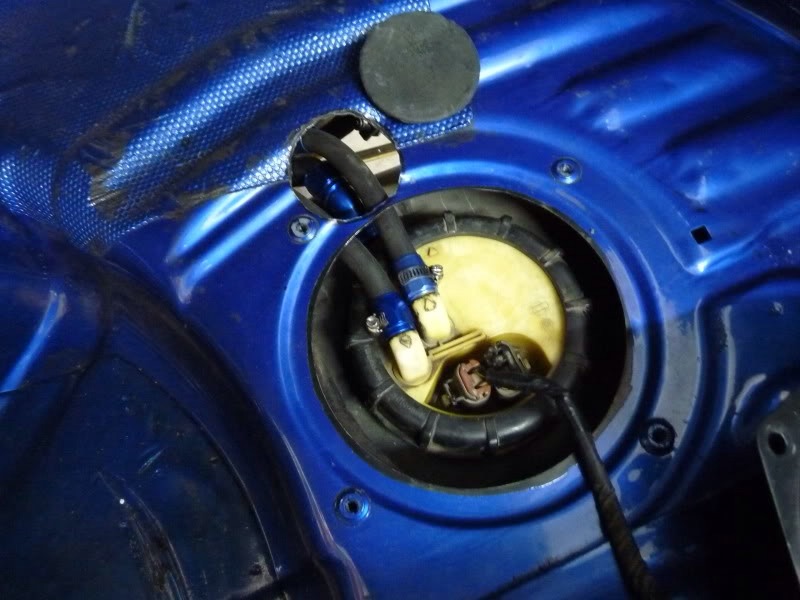 Sub Boy said:
Can do Dick, Any shots in particular? Just got to peel myself off the couchuke:
Click to expand...

Photos of the rear brakes on the car. Perhaps photo with rear wheel off the car exposing brakes and with wheel on.

hytech said:
Photos of the rear brakes on the car. Perhaps photo with rear wheel off the car exposing brakes and with wheel on.
Click to expand...

No worries, Will sort tonight

Mikster said:
Looks good. Hopefully that oil cooler wont obstruct cooling airflow too much if you are doing track work..
Click to expand...

Funny enough it is almost the factory Nismo position for the oil cooler.

When I first got the car it had a Nismo AC radiator that was 2/3 the size of a standard one with the oil cooler on the other 1/3....Was nice....

...Unfortunately I wrecked that when I crashed it:chairshot, I haven't had any issues with heat and with the Big Radiator even on the track it was fine.